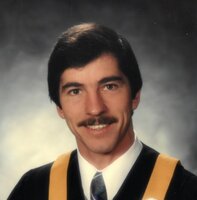 MOUNT WILLIAM – Brian Steven “Steve” Rutledge, 65, Mount William, passed away peacefully at home, Tuesday, November 2, 2021, with his family by his side. Born in New Glasgow, he was a son of Margaret Naomi (Naugler) Rutledge, New Glasgow and the late Lawrence Roger Rutledge. Steve was a Red Seal and Shipwright Carpenter. He was employed with the Halifax Dock Yard for eight years and operated J.I.M.S. Construction for 25 years. Prior to retirement, he was a Building Inspector with the Municipality of Pictou County. Steve was a member of Trenton Church of the Nazarene. In earlier years, Steve played in the Stellarton town hockey league. During his years as a building inspector, he was actively involved with NSGEU. Steve was an avid pool player, occasional snooker player, and a member of the Diablos Pool Team. He enjoyed watching his beloved Pittsburgh Steelers, Montreal Canadiens, and Toronto Blue Jays. Steve enjoyed “cranking the tunes” with his boys on the way to the camp and sharing his love of 70’s rock and roll with them. He could often be found relaxing watching comedy TV and Western movies. Steve was a proud father of three sons whom he adored. He made sure Evan got to his baseball and hockey games; Jared got to his soccer games; and Kyle to his hockey games, or wherever they needed to go. When his grandchildren arrived, he took every opportunity to be part of their lives; he was “Poppie” to Ashton and Angel. For Steve, “Life has changed; not ended!” Surviving are his wife of 40 years, Elizabeth “Liz” (Langille); sons, Evan and his children, Ashton and Angel, New Glasgow; Jared (Amanda), Pine Tree; Kyle (Danae) and her son, Leland, New Glasgow; siblings, Blaine (Susie), Eckville, Alta.; Louise (Gerald) Landru, Plymouth; Donna (Donnie) Campbell, Stellarton; Herbie, Trenton; Lynn (Terry) Dryden, Truro; Juanita (Terry) Linthorne, Kenzieville; Kevin (Ellen), Trenton; Leanne MacDonald (Dave), New Glasgow; many nieces and nephews. A private service will be held with interment in Sunny Brae Cemetery. To plant Memorial Trees in memory of Brian Steven "Steve" Rutledge, please click here to visit our Sympathy Store.