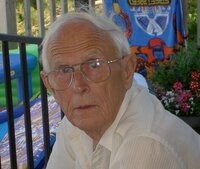 NEW GLASGOW - Kenneth Paul McAllister, 92, New Glasgow, passed away October 4, 2021 in the Aberdeen Hospital, New Glasgow. Ken was the youngest of three children born to the late Hugh and Jenny (Webb) McAllister. Ken was born and raised in Dunlaoghaire, County Dublin, Ireland. Following his older brother, Eugene, he emigrated to Montreal, Que., at the age of 22, where he resided for almost 50 years before moving to New Glasgow where his daughter, Lynda, her husband, Scott and their children, Connor, Kieran and Cameron lived. After two years on his own he moved in with Lynda and her family – a move welcomed by all! Ken’s worked for many years with Imperial Oil, Montreal, designing and overseeing the building of Esso stations all through Quebec. Ken was a “Mr. Fix It”. He loved fixing things, although his strength was making them work, not how they looked, sometimes to his family’s chagrin. It was even better if in doing the repair he could save a buck. He began tinkering with things as a child, trying to figure out what made things tick, which grew into a lifelong obsession. Even into his late 80’s he was still changing the oil on his car, working on the brakes and doing repairs around the house. He also volunteered as a driver for Meals on Wheels into his 80’s delivering for to “the old folks” as he called them and was recognized for his efforts by the VON. Ken was a quiet man, but had a well known and sometimes sharp and off beat sense of humour. He was raised in neutral Ireland during the Second World War and loved reading and learning about the war, having many books, documentaries, and movies on the subject. He was an aficionado on all things Second World War: battle theatres, artillery, tanks, ships, aircraft and military personnel. Ken had a unique connection with animals. He and the family dog, Finnigan, many walks together (or, more it was Finnigan who took Ken for a walk or drag on occasion). His loved his great grand kitty, William and the two shared many hours napping on the couch together. Ken loved his children, Lynda, Kevin and Terry. The saddest moments of his life came with Kevin’s loss in 1981 at age 16 and then the loss of his wife, Elaine in 1997. He loved being grandpa to his grandchildren, the three boys in New Glasgow, his step-grand daughter, Kelsey and his fourth grandchild, Jack, who resides in Montreal with Terry and his wife, Lisa. Ken was never the type of grandpa who read stories to the kids but instead would explain how an airplane flew or how something was built. In his later years he would often share interesting news tidbits he saw or read at the supper table. Ken wanted to make sure all his grandkids would receive their education and gave very generously to support post secondary education, Besides his wife, his son, and his parents, Ken was predeceased by his brother, Eugene and sister, Carmel. He was also predeceased by his cousin, Niall, who was his best friend and whom he loved like a brother. Funeral service will be held 11 a.m. Friday, October 8, 2021, in P. & K. MacDonald Funeral Home Chapel, New Glasgow with Father MacDonald Ibeh presiding. No flowers please. If desired, donations may be made in memory of Ken the Pictou County VON or Pictou County SPCA. (To donate, please click the underlined.) To plant Memorial Trees in memory of Kenneth Paul McAllister, please click here to visit our Sympathy Store.