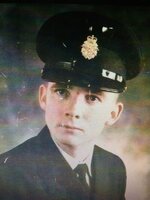 Willard "Wayne" Barnett, 68, Langford, B.C., past away on Friday, July 23, 2021. Born in New Glasgow, Wayne was the oldest son of the late Willard Charles Barnett and Laurie Jardine. Wayne served as a Peace Keeper in the Army from 1975-83, when he was Honorably Discharged due to a medical condition. He also worked at Hawker Siddeley/Trenton Car Works. Wayne eventually moved to Vancouver Island, where he resided for last 30 some years, working as a truck driver before retiring. Surviving are his brother in-law, Jackie Druhan, Trenton; sister, Cindy-lee MacLean, Trenton; nieces, Heather Walsh and Tiffanie Cameron; nephews, John Druhan, Brent Cameron and Ryan Simons. He will also be missed by his cousin, "Harley", who always called him, Uncle Wayne. Besides his parents, Wayne was predeceased by his sister, Faye Druhan and brother, Douglas Barnett of Trenton. "We are physically apart and we miss you terribly but this is not a separation, as we have you in our hearts and memories." - Cindy Wayne will leave us with his favorite saying, "I'll carry on as if I'm normal". If desired, donations may be made in memory of Wayne to the Canadian Cancer Society or any charity of your choice. Lovingly written and submitted by his sister, Cindy. To plant Memorial Trees in memory of W. Wayne Barnett, please click here to visit our Sympathy Store.