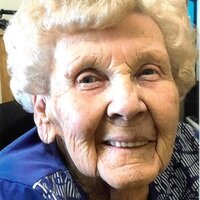 NEW GLASGOW - Ethel Hopkins, 98, Glen Haven Manor, New Glasgow, passed away peacefully, Sunday, November 1, 2020 in the Manor. Born June 11, 1922 in Basingstoke, England, she was a daughter of the late Frederick George and Ethel Alice (Hutchins) Tyrrell. Ethel was the eldest of four children and was raised primarily by her beloved grandmother, Ann Hutchins. She met her husband, Gordon, during the Second World War while he was stationed in England with the Canadian Infantry. A proud war bride, she travelled on board the Île de France to Pier 21, Halifax, settling in Sydney Mines, where she raised four children. Ethel had many warm memories from time spent at the family cabin in Boisdale, on the Bras’ d'Or Lakes. Following Gordon’s death, she moved to New Glasgow to be near her family and became a member of St. George’s Anglican Church. She enjoyed bowling and spending time with her daughter, Beverly and son-in-law, John. Ethel possessed an infectious laugh that caused those listening to join in. She was a very loving lady who drew people to herself. When the time came, she graciously transitioned to Glen Haven Manor where she attracted many friends and was honoured to be on the cover of the Residents Living Pamphlet. Ethel cherished the many visits from her family, especially great-granddaughter, Grace, who always said, “Nanny Hopkins is my best friend”. She was a beloved mother, grandmother, great-grandmother, nanny and friend who will be deeply missed by all she loved. Surviving are sons, Brian, Nelson, B.C.; Douglas (Marg), Linacy; daughters, Beverly (John) MacKinnon, Alma; Linda (Richard) Wood, Edmonton, Alta.; grandchildren, Curtis MacKinnon, Cheryl (Scott) Patterson, Keith (Dale) Hopkins, Darleen Elliot, Kimberly (Ron) Hollett, Jared Dalziel and Ashley Dalziel; great-grandchildren, Briar, Drew, Brett, Rowan, Grace, Taylor, Madison, Alex, Shea, Sebastian, Gordon, Jordan and Isaiah; brother, Doug Tyrrell, England; brother-in-law, George Hulcoop; many nieces and nephews. Besides her parents, she was predeceased by her one true love, Gordon Renold Hopkins; sister, Bett Hulcoop; brother, Ron Tyrrell; daughter-in-law, Yvonne Hopkins. Ethel’s family are most grateful to the Glen Haven Manor staff for the compassionate care she received throughout the past eight years. In honour of Ethel’s wishes, she will be interred in Sydney Mines alongside her true love at a later date. To plant Memorial Trees in memory of Ethel Annie Nellie Hopkins, please click here to visit our Sympathy Store.