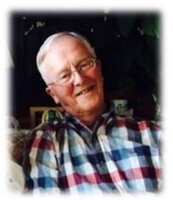 NEW GLASGOW - Murray F. “Mike” Gardner, 89, New Glasgow, passed away peacefully, Monday, November 1, 2021, at home. Born in Brooklyn, Queens County, he was a son of the late Edgar R. and Mildred (Fulton) Gardner. He was a faithful member of First United Baptist Church, New Glasgow where he served as treasurer for many years. In earlier years, Murray had been employed by Bowater Mersey Paper Company, Brooklyn and prior to retirement in 1992, with the former Scott Maritimes, Abercrombie. Murray was a member of Albion Lodge No. 10, A.F. & A.M., New Glasgow and was a Past Master of the former Euclid Lodge No. 92, New Glasgow, where he had served as Secretary and Treasurer for many years. He served as Grand Steward and District Grand Chaplain with the Grand Lodge of Nova Scotia. He was very active with other Masonic concordant bodies. Murray received the Merits Service Award for his dedication to Masonry. He was a member and Past Worthy Patron of Ceilidh Chapter No. 10, Order of Eastern Star and a Past Worthy Grand Patron of the Grand Lodge for Nova Scotia and Prince Edward Island. Murray was an honorary member of Elm Chapter, OES, Upper Stewiacke. He was one of the four founding members of the Pictou County Prostate Cancer Support Group, where he was very active and had served as treasurer until his passing. Murray loved and served his God through involvement in the church and community. A man devoted to his family, there was nothing he would not do for them. He was very proud of all their accomplishments. Murray treasured their visits, whether in person, on Facetime, or via telephone. He enjoyed “drop in visits” at the house and everyone that greeted him with “how are you?”, received a hearty, “fantastic!” Murray had a deep concern for people which was evident in his involvement in community service groups: Y’s Men, K-40, Shriners, and Pictou County Prostate Cancer support group. He hoped that residents of New Glasgow and surrounding area benefited from his desire to make life better for those in need. Murray cherished all his family pets and enjoyed his trips to the farm to see Nellie and the boys. He enjoyed hearing how all the puppies in the family were doing, especially little Coco and Max. Surviving are his partner, Margaret Westerby, Ottawa; daughters, Dianne (Blake) Storey, Waterside; Linda, Vancouver, B.C.; Nancy (Kelly) Verbicky, Portland, Ore.; son, Craig (Andrea Schmaltz), Ottawa; grandchildren, Shannon (Doug), Andrew (Brianna), Aaron (Teresa), Mitchell, and Meaghan; great-grandchildren, Nathaniel “Nate”, Michael, Erica, Ivan and twins, Mia and Sam; several nieces and nephews. Besides his parents, he was predeceased by his wife of 58 years, Arna; grandson, Taylor, who passed on the same day; brother, Ross; sisters, Hilda Emenau and Francis Kuniholm; sister-in-law, Ruth Gardner; brothers-in-law, Ted Emenau and Harry Kuniholm; special daughter, Deborah Cowley. The family will receive visitors 2-4 p.m. Tuesday, November 16th in P. & K. MacDonald Funeral Home, New Glasgow from where funeral service will be held 11 a.m. Wednesday, November 17th in the chapel with Rev. Dr. Morley Shaw presiding. Interment will be held 1 p.m. Thursday, November 18th in Seaside Cemetery, Brooklyn. Ceilidh Chapter No. 10, OES service will be held 4:15 p.m. Tuesday, November 16th in the funeral home. Albion Lodge No. 10, A.F. & A.M., will will be held 10:40 a.m. Wednesday, November 17th in the funeral home. Donations may be made in Murray’s memory to The Order of the Eastern Star Service Dog Charity. (Please click on the underlined to donate online OR cheques may be made payable to Grand Chapter, OES NS & PEI and forward to Service Dog Program, Grand Secretary OES Nova Scotia & Prince Edward Island, 41 Settlers Point, Lyons Brook, NS B0K 1H0 To plant Memorial Trees in memory of Murray F. Gardner, please click here to visit our Sympathy Store.