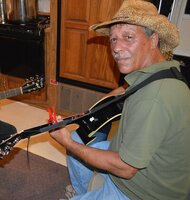 MACLELLANS BROOK – The family of David Goodspeed Fanning Sr., of MacLellan’s Brook, is devastated to announce our loss. David passed away peacefully, Wednesday, December 15, 2021 at the age of 60. David was born in New Glasgow, a son of the late Andrew James Fanning and Eleanor (Mosher) Fanning. David was employed with Dartek Transport as a driver and manager where he was valued for many years by his work family. Before it’s closure, he was employed with Trenton Works as a welder, and later relished in his role as President of the United Steelworkers Union 1231. David left behind his wife and best friend, Channin R. (Fraser) Fanning; step-mother, Nancy Fanning, New Glasgow; daughters, Sarah (Neil), Trenton; Melissa, Halifax; Courtney (Nick), Stellarton; sons, David (Jodie), Kamloops, B.C.; Andrew “A.J.” (Shelby), Sutherlands River; grandchildren, Bailey, Olivia, Jack, Mark, Cassidy, Keegan, Kaius, Ruby, Andrew, Wolf, Braxton and Melia; sisters, Jo-Ann Cornelius, Jasper, Alta.; Joyce “JC” (Mario) Larochelle, League City, Texas; Bernadette Weeks, New Glasgow; Julie Fanning, MacLellans Mountain; Theresa Fanning, Prince Edward Island; Kristy (Guillio) Mills, New Glasgow; Terry Mosher, Halifax; brothers, Andrew “Jim” Fanning, Halifax; John Fanning, Sudbury, Ont.; Perry Morris, Halifax; Everett (Kathy) Baker, Little Harbour Road; Roy Baker (Ester), Alberta; mother-in-law, Elizabeth “Sissy” Fraser, Trenton; sisters-in-law, Rhonda MacKenzie, Fort McMurray, Alta.; Vania MacMillan (Steve), Westville; many nieces, nephews, cousins and friends. Besides his parents, he was predeceased by his twin brother, Donald, in infancy, brother, Michael; several nieces and nephews; sister-in-law, Bernadette Lewis; brothers-in-law, George Cornelius and David Weeks. Our Dad was a hard worker, who always found a way to do what needed to be done. He was honest and loyal and absolutely hilarious. But what truly defined him was the love he had for his family. He never hesitated to eliminate any obstacle no matter the circumstance, to bring us together, as often as possible and for as long as possible. Dad loved whisking us away on countless adventures and camping trips throughout the province when we were young and, his greatest wish was to someday have a place just for us. That place became the Fanning Oasis, his piece of paradise - where his children, grandchildren and extended family could come together. He loved sitting around the fire making jokes (usually about one of us) just as much as he loved silent weekends alone with our Mum at the haven they built for us all. Dad was many things to many people. His eyes were soft, his smile was contagious and his laugh was simply unforgettable. He was the heart and soul of our entire family. We can only hope that as we walk forward without him, the values and memories he worked so hard to leave behind will carry us through. In honour of Dad, his family will celebrate his life privately. In lieu of flowers or donations, if you would like to honor our Dad – do what he did best. Bring your family together. We got it from here, Dad - your loving family. To plant Memorial Trees in memory of David Goodspeed Fanning, please click here to visit our Sympathy Store.