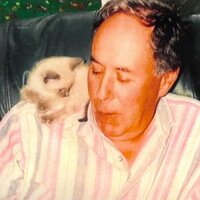 PONDS – James Alvin MacDonald, 77, Ponds, passed away peacefully, Wednesday, September 30, 2020 in St. Martha’s Regional Hospital, Antigonish, surrounded by the love of his family. Born in Pictou, he was a son of the late John Angus “Jack” and Greta (Cheverie) MacDonald. At a young age Alvin became a carpenter, working in construction. Taking a break, he moved to Toronto, Ont., and drove a truck for seven years. Following, he returned home, purchased and operated the Lismore Shell for 10 years. Alvin followed his love for the ocean and purchased a lobster fishing license, which he fished for over 20 years. At the same time, he started MacDonald Sandblasting, which he operated for over 30 years. Alvin did not like being idle and for the last 15 years, worked part-time at the Lismore Wharf. He always said, “don’t put off tomorrow what you can do today and see that you do!” Alvin enjoyed fiddle music, dancing and spending time with his family and friends. He possessed a “soft spot” for his furry friends, Whalen and Lila. For Alvin, “Life has changed; not ended!” Surviving are his wife of 55 years, Marsha (MacGillivray); sons, John (Christa) MacDonald and Brian (Tracey) MacDonald, Leesburg, Virginia; Blaine “Benny” MacDonald, Lismore; grandchildren, Lindsey, Chailyn, Annie, Lilly and Ella; sisters-in-law, Jo-Ann MacDonald, Ardness; Eleanor Slevin, The Ponds; many nieces and nephews. Besides his parents, he was predeceased by brothers, William in infancy and Roy; sister-in-law, Mary in infancy; brothers-in-law, Wilfred “Bud”, Gordie and Kevin MacGillivray; two nieces. The family will receive visitors 6-8 p.m. Sunday, October 4th in P. & K. MacDonald Funeral Home, New Glasgow. A private Mass of Christian Burial will be held in St. Mary’s Roman Catholic Church, Lismore with Father Colin MacKinnon presiding.