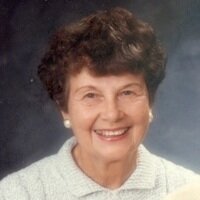 STELLARTON – Esther Eileen Thompson, 96, Glen Haven Manor, New Glasgow, formerly of Stellarton, passed away peacefully, Sunday, July 4, 2021, in the Manor, surrounded by the love of her family. Born in Trenton, she was a daughter of the late Walter Joseph and Ethel Lorena (Leadbetter) Shanahan. Prior to retirement, Esther had been employed with the former MT&T as a switchboard operator and in administration, a switchboard operator at the Aberdeen Hospital and in retail. She was very active throughout the years, skating, swimming, bowling, traveling, playing tennis, practicing yoga, playing cards and games of all sorts. Esther had a fun and competitive spirit, a sharp wit and enjoyed laughing with family and friends. There were always biscuits, apple pie and a cup of tea ready to be enjoyed in Esther’s kitchen. She possessed a zest for life, enthusiastically waking each day to share life with others. Esther was happiest when surrounded by people and loved her Glen Haven Manor family. She will be dearly missed by all those she loved. Surviving are her daughter, Carol Thompson, Stellarton; sons, David (Lenore) Thompson, British Columbia; Donald (Jennifer) Thompson, Alberta; grandchildren, Morgan (Angus), Matthew (Kelly), Aaron and Caitlin (Matthew); great-grandchildren, Alyson, Brianna and Ella; sisters, Betty (Hugh) Campbell, New Glasgow; Brenda (Gary) White, Bedford; many nieces and nephews; beloved in-laws; dear friend, Alice MacIntosh. Besides her parents, she was predeceased by her husband, Francis “Darb”; sisters, Dorothy in infancy, Lee Russell and Nickie Armsworthy; brothers, Bernie, Jack, Herman and Ronald Shanahan. A private graveside service will be held in Heatherdale Memorial Gardens at a later date. Esther’s family wish to express their gratitude to the caring staff of Whispering Tide for the tenderness and affection they have shared with her over the past five years. If desired, donations may be made in Esther’s memory to any charity of choice. To plant Memorial Trees in memory of Esther Eileen Thompson, please click here to visit our Sympathy Store.