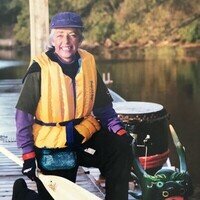 NEW GLASGOW – Phyllis June Parker, 82, New Glasgow, passed away peacefully, April 20,2021, at Glen Haven Manor in New Glasgow, surrounded by the love of her family. Born in Moncton, she was a daughter of the late Arthur Reginald and Alice Josephine Victoria (Fielding) Abell. Growing up her family lived in various places in the Maritimes such as Kentville and Halifax, but finally settled in St. John, New Brunswick. Phyllis was the first in her family to attend university. She graduated from Acadia University (B.Sc.) in 1960 and became a Dietician. She did her dietetic internship at Royal Victoria Hospital, Montreal. She was employed as a dietician and instructor at the St. John General Hospital, St. John, N.B.; Nova Scotia Hospital, Dartmouth and the former Aberdeen Hospital School of Nursing, New Glasgow. She also was previous a member of the University Women’s club. She possessed a desire to help others and was involved in two such programs: a Hospitality Training Program in 1986, and a Job Entry Program in 1992 which positively impacted many lives. Phyllis was also an avid gardener and got much enjoyment from her gardens both at her home and the cottage. She was also a phenomenal cook. Phyllis survived breast cancer in 1997 and soon after became part of the group Women Alike, a support and advocacy group for breast cancer survivors and those living with breast cancer. Phyllis was one of the founding members of Women Alike Abreast A River and was instrumental in helping get the first ever Dragon boat to Pictou County. She was lead stroke in the boat for many years and then later became the drummer. She attended many international racing events with her teammates and forged strong lifelong friendships. She also wrote the column “Dragon Tales” for the Pictou Advocate from April 2000 to January 2014 which greatly assisted in raising awareness and discussions on breast cancer issues such as treatment changes to chemo, radiation, lymphedema, breast reconstruction, as well as to provide information on Women Alike Abreast A River’s activities. She was a strong advocate to help women take charge of their health. In 2019, Phyllis along with present and former Dragon boat teammates, were inducted into the Pictou County Sport Heritage Hall of Fame for their impact. She is survived by her husband, T. Robert "Bob" Parker; loving daughters, Cathy (Paul) Sampson, Halifax; Beth Parker, Bedford; grandchildren, Nicholas, Jacob, and Sophie; sister, Beverley A. (Cliff) Floyd, Stouffville, Ont.; brother, Dr. Robert (Evelyn) Abell, Ottawa, Ont.; and numerous nieces and nephews. A private funeral service will be held at P. & K. MacDonald Funeral Home Chapel at a future date. The family would like to genuinely thank the Long-Term Care floor at the Aberdeen Hospital and the Palliative Care Team at Glen Haven Manor for their excellent care of Phyllis. In lieu of flowers, donations may be made in memory of Phyllis to the New Glasgow Dragon Boat Society or to Tearmann House, New Glasgow. (Please click one of the underlined to donate online.) Lovingly written and submitted by her family. To plant Memorial Trees in memory of Phyllis June Parker, please click here to visit our Sympathy Store.