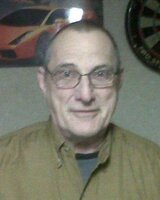 Born in New Glasgow, he was a son of the late Joseph and Helen Elizabeth (MacIntosh) Wilson. Prior to retirement, Joey was employed with Sobeys Warehouse, Stellarton for 32 years. In younger years, he, and his sons, fished all season throughout the county. Joey enjoyed walking on the beach listening to the waves, digging for mussels or clams. He appreciated the solitude of the forest, often taking walks through trails looking for deer signs and breathing the fresh air. He was member of the Royal Canadian Legion, Branch 34, New Glasgow where he played in the dart league. Joey was fond of his pets, Paco, Lucy and Smokey “Harold”. He was a “people person”, often stopping to chat for “hours”. Joey greatly enjoyed spending time with people. He is best described by his family as a loving, caring, sweet man.

Besides his parents, he was predeceased by his wife, Donna; sister, Bonita “Bonnie” Adams; mother-in-law, Edna Byers, Riverton.

His family will celebrate his life privately.

Donations may be made in Joey’s memory to his family.