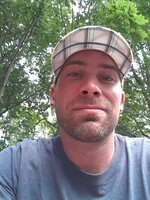 Born in New Glasgow, he was a son of Nora Jean (Smith) Copan and Ross Alexander Calder.  Corey was a welder and iron worker. He was an avid outdoorsman and enjoyed many sports. Corey loved music, especially playing the guitar.  He adored his two children and was loved by many.

Corey’s life will be celebrated privately, and he will be laid to rest with his paternal grandparents in MacKay Cemetery, St. Georges Channel.

Donations may be made in Corey’s memory to the Heart and Stroke Foundation of Canada or Aberdeen Health Foundation Palliative Care Unit Endowment.

"Life is short, live it.

Love is rare, grab it.

Anger is bad, dump it.

Fear is awful, face it.