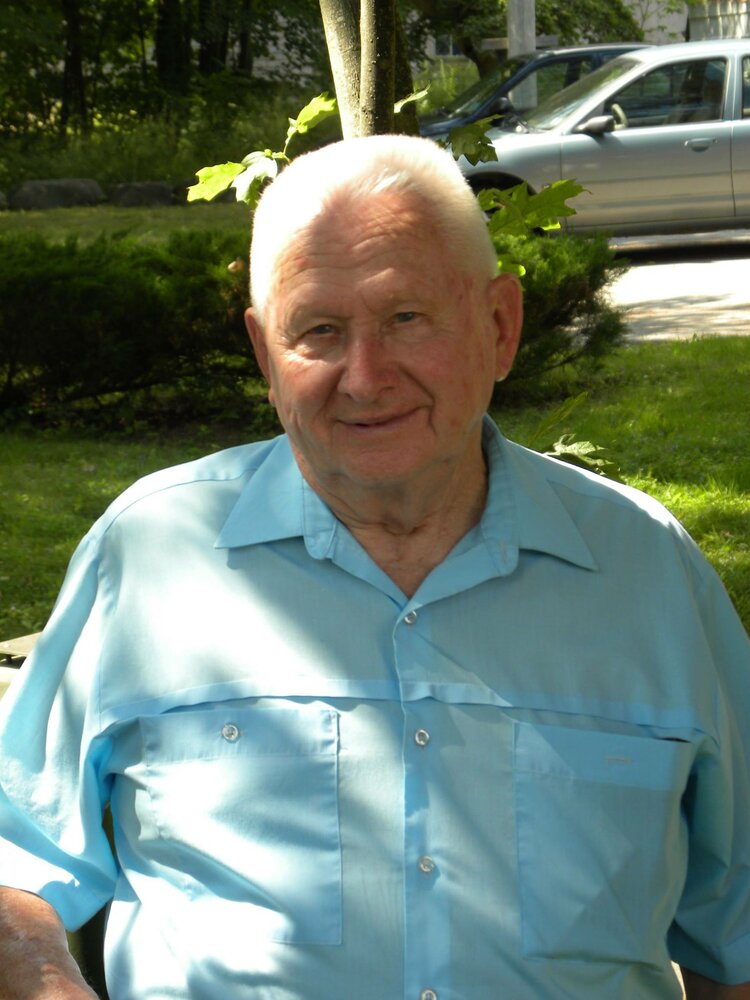 Please share a memory of Vernon to include in a keepsake book for family and friends.
View Tribute Book

It’s with heavy hearts that the family of Vernon Keith Hirtle announce his peaceful passing on the evening of January 7, 2023, at the Aberdeen Hospital in New Glasgow at the age of 93.

Born in Wileville on August 12, 1929, Vernon was the son of Hugh and Millie Hirtle (nee Eisnor) and the brother of eleven siblings.  For 56 years, Vernon was married to the love of his life, Beulah Mae Hirtle (nee Pentz) until her passing in 2008. Together, Vernon and Beulah were avid travelers and enjoyed an active social life but were most happy when spending time with family.

Vernon will always be fondly remembered by friends and family alike as being the life of the party who could find a friend or a connection in any room he walked into. He will always be remembered for his larger than life smile, bellowing laugh or subtle little giggle along with his well-known and countless “catchphrases.” But most of all, he will be remembered for his kind heart and loving nature to all who had the privilege of knowing him. Whether it be at one of his much publicized birthday celebrations, a “Christmas do” or just a casual night, Vernon always made every guest at home, at camp or wherever needed, feel welcomed and included which is a trait he passed along to his children and grandchildren.

His entire life has been one of an avid outdoorsman who could most often be found enjoying his leisure time deer hunting with friends and family at his beloved “Beulahland” in Barney’s River or casting a line on Trout Lake at Camp “Tunderation”. A tradition that has been passed down to all the boys that is still alive and well. However, as much as he enjoyed hunting and fishing, his true passion was that of a card shark around the table. Whether it be with his family or good buddies, the likes of Grant Williams, Andy Hirtle or Dave Delorey. All can attest to Vernon’s “attention to detail” during a good game of 45’s.

Vernon moved his family to New Glasgow in 1968 where he continued his career as Branch Manager with Metropolitan Life Insurance until his retirement in the early 1990s. Vernon was a very well respected and devoted community volunteer as evidenced by his 49 years of dedicated service to the United Commercial Travelers, Pictonian Council 879, New Glasgow. Vern was a member of Albion Lodge, No. 5, A.F. & A.M., New Glasgow and the Pictou County Shrine Club. He was a faithful member of Trinity United Church, New Glasgow where he served in many capacities and fostered many long-lasting relationships over the years. Vernon was always quick to mention the great times and valued friendships he’s had over the many years with Leo Ronan, George Cameron, Stan, Kay, Stan Jr. and Joan Hartling, Paul McCracken, Reg Conrad and the entire Williams family in Barney’s River.

Besides his parents, he was predeceased by his wife, Beulah; son Hallett “Hal” Hirtle; grandson, David Hirtle; siblings, Calvin, Elizabeth and Eldon in infancy, Vance, Dougie, Donnie and Audrey.

By request, family flowers only however, donations in memory of Vernon Hirtle can be made to Trinity United Church, New Glasgow, Pictonian Council 879, United Commercial Travelers, New Glasgow or Albion Lodge, New Glasgow.

Vern’s family would like to give special thanks to the nursing staff at the Aberdeen Hospital in New Glasgow, specifically the Palliative Care Unit, who provided exceptional comfort and care for Vernon and his family in his final days.

Until we meet again Vern……… “May we always have a little one!”