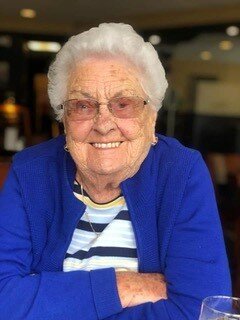 Please share a memory of Emily to include in a keepsake book for family and friends.
View Tribute Book

THE PONDS - Born October 2, 1917, our beloved Grandmother, Sarah Emily Donnelly, passed away peacefully at the age of 105 on Wednesday, January 11, 2023, at Valley View Villa, Riverton, surrounded by her loving family.

Born in Antigonish, “Em” was the eldest of seven children of the late John Frederick and Elizabeth Georgina (Grant) Williams. She grew up in Barney’s River where the shortest way to school, 2.5 miles away, was to walk along the railway tracks and jump off when a train was heard in the distance. At a young age she developed a strong work ethic, helped to look after her siblings, minded the animals on the farm, and worked as a temporary camp cook at her father’s lumber mill.  From 1939-1949, Emily was employed as an operator with the former Maple Leaf Telephone Company.  After marrying Allister Smith, in 1950, they moved to Ontario where she was employed as a Bell Canada supervisor in the Salary and Benefits Department. However, she would tell you that her greatest job was raising her three children: Marlene, Freddie and Billy.  After retirement, she became a member of The Royal Canadian Legion Branch 15, Ladies Auxiliary in Brampton, Ontario, where she served as president for six years. She also volunteered with the Peel Memorial Hospital Ladies Auxiliary during this time.  After the death of her second husband, Alec Donnelly, in Ontario, Emily moved back to The Ponds.  She always took pride in her home, her community, and her family. She was an active member of St. Paul’s Presbyterian Church, past president of the Merigomish and District Volunteer Fire Department Ladies Auxiliary and was always ready to bake up a storm for any fundraiser. In her earlier years, she enjoyed skating, dancing, playing darts and cards, especially cribbage. However, throughout her life, her real joy came from being around people. Whether it was cooking a meal at home or going out for a meal at a local restaurant, she loved to spend time with others by sharing stories, raising a glass, and having a laugh.

Emily became the tether between her east coast and west coast families, traveling well into her eighties to British Columbia for the birth of each of her seven great-grandchildren. It is amazing to consider the life of someone who was born just before the Spanish Flu pandemic and survived the latest global pandemic.  It is a wonder that she was alive during the inventions of cars, televisions, plane travel, and technology.  She was witness to five British Monarchs, 16 Prime Ministers, and 19 US presidents. How do you summarize the life of a woman who experienced so much life, so many changes, so much love and heartache? She was our Matriarch. She was tough as nails, held a strong opinion, and had a definite thirst for living.

Emily experienced more adversity that most of us could endure.  Yet she was buoyed by the love of her family, winning a game of crib, baking a fresh pan of scones, or the cuddle of a baby [oh, she loved babies!].  In her most recent years, her highlights were weekly outings with her nieces and visits with her family and friends. There was never a visit when a funny story or a good laugh was missed. Emily was a highly respected lady who lived life to the fullest. When asked what contributed to her longevity, she answered, “I can tell you that having some hard times, dancing, playing cards for a little money, and the odd drink of rum haven’t done me any harm.”

She will be dearly missed by her many family and friends. Her legacy will be celebrated and cherished. Everyone who met Emily has a special story that they hold dear in their heart, and we are hoping these stories can be shared at her Celebration of Life.

Her grandchildren wish to thank everyone at Valley View Villa for the care, love, and respect that she was shown during her stay over the past six years. As well, massive gratitude and love to her niece, Wendy who, with her friendship, visits, and care, greatly improved Emily’s quality of life.  Our gratitude and love is also extended to her nephew, Eric for letting her win a game or two of cards.

A Celebration of Emily’s life will be held at a later date.

Family flowers only. Donations may be made in Emily’s memory to The Nick Williams Foundation or Canadian Cancer Society.