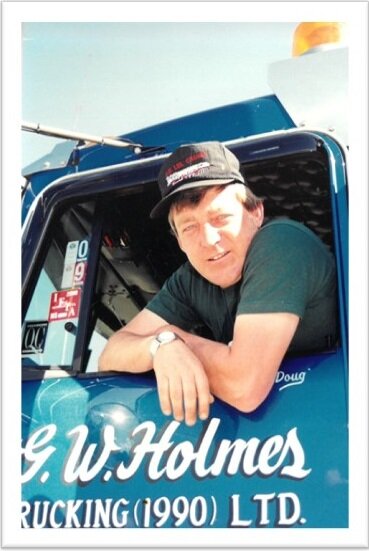 Please share a memory of Douglas to include in a keepsake book for family and friends.
View Tribute Book

Born in New Glasgow on August 8, 1958, he was a son of the late Charles Wesley and Marion Julia (MacDonald) Cooley. Doug began his trucking career at the age of 16 years when he began driving for G.W. Holmes Trucking until 2003 when he joined A.W. Leil Cranes where he was employed until 2009 when he retired due to ill health.  Doug was most appreciative of his many friends and family, who on any day of the week, would stop by and pick him up for an adventure. Doug looked forward to the summer, where keeping his lawn immaculate and his pool in top condition was a priority. He enjoyed camping with his family and the countless hours spent around the campfire sharing a drink and stories or in the camp playing cards. In mid-life he discovered snowmobiling and was an avid enthusiast for many years and in later years, the I pad, on which he spent many enjoyable hours. Doug was a funny, caring and compassionate man who was dedicated to his family.  His love for his wife, children and grandchildren knew no limits.

Besides his parents, he was predeceased by his in-laws, John W. "Jock" and Margaret Catherine “Kay” (Cameron) Forsyth; brothers-in-law, Douglas (Roma) Forsyth and Wayne Clyburn.

Donations may be made in Doug’s memory to the Thorburn Cemetery or Thorburn and District Fire Department.