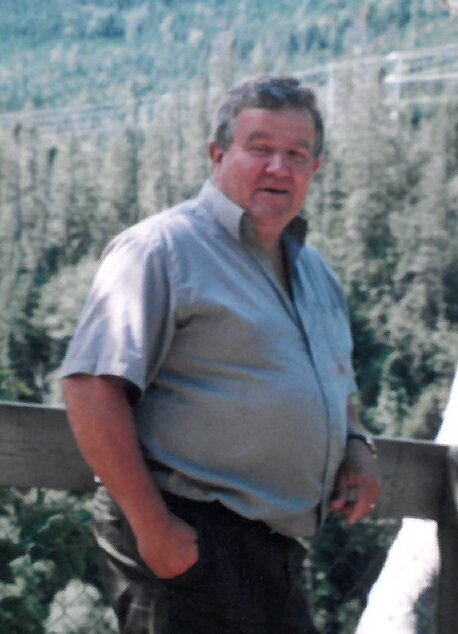 Born on March 30th, 1951 to Katherine and Hugh Stewart at St. Martha’s Regional Hospital in Antigonish, Brian spent most of his childhood and teen years living in Ashdale, Antigonish County and believing his birthday was March 31st until eventually acquiring his birth certificate at 16. Growing up with eight brothers and sisters, Brian was a hard worker from a young age and spent many mornings before school working his family’s farm.

Although the hard work continued, Brian’s teens and early 20’s were sprinkled with plenty of rowdy fun alongside his brothers and buddies down the road, like Bernie, Benny, and Aubrey. It was in his late teens where Brian, the man with 99 lives, had one of his first and probably most serious accidents. Totaling his VW Beetle on a telephone poll in a field, things were touch and go for BJ and the doctor expressed to Brian’s father that if he made it through the night, he would be ok. Brian then perked up and told him, “Just give me a quart of oil Doc and send me home.” To which the doctor said, “He’s gonna be just fine.”

Always a fast and smooth talker, a favorite story of Brian’s was the time in his mischievous youth that he pulled the spark plug wires out of Stompin’ Tom Connors’ vehicle while he was performing one evening in Antigonish. Much to Brian’s surprise, he had an audience during this act in the form of a police officer, who failed to see the humor in the situation. However, Brian managed to talk his way out of trouble, returned the spark plug wires to their rightful home and went on his merry way without so much as a fine.

Though Brian’s ankles were never truly the same after his accident, he still never shied away from hard work. In the early 70’s, Brian was employed by the Met in Antigonish, where he met Eleanor (“The Old Dragon”), the woman who would become his beloved wife of almost 49 years. Married in 1973, Brian and Eleanor spent four years in Ontario before coming back to settle down and start a family in Pictou County.

It was in Pictou County that the Toolman was officially born, as Brian became a franchisee of Snap-On Tools and the Bargain Truck set forth to lure hundreds of unsuspecting patrons that Brian skillfully “ripped” for the next 20 years. Many of Brian’s loyal customers may recall him emerging from the Bargain Truck with a jovial and boisterous greeting, “FRIEND!”, before often following up with a few good natured insults. It was during this period of Brian’s life that he also dabbled a bit in songwriting, when one of his greatest hits still sung to this day was created, “Come Get ^&*%#! on the Bargain Truck”.

Beyond his fine Bargain Truck, Brian’s other pride and joys included his four children, Kevin (“Bert”), Kurtis (“Bert”), Katie (“Princess”), and Kris (“Square Head”). He and Eleanor gave their children an idyllic childhood on Park Falls with plenty of woodsy trails Brian cleared for them to run and multiple 4-wheelers without brakes for them to drive. He didn’t concern himself too much with damage to his material possessions and when his kids were responsible for the damage, he rarely gave more than a, “Je*** F*** ~insert kid’s name~”, a head shake, and a final chuckle.

Brian was a guy who could build and fix most anything; though not always to code or aesthetically pleasing, it usually got the job done. An inventive and resourceful man, Brian eventually sold the ol’ Bargain Truck and began a new foray into the world of plastics. Polythane began with fixing forklift wheels on a lathe and eventually grew to include plastic products designed and made in-house, and sold to companies across Canada. To accomplish this, Brian built industrial ovens from scratch, created molds, and learned how to make polyurethane plastic – all done without any formal training but only an ingenious mind (as he’d probably describe it himself) and an insatiable drive to succeed. It was here he also fulfilled a dream of working with his three sons – though they all irritated each other frequently, it was a cherished time and a bucket list item checked off for Brian.

The forever jokester, it thrilled him to torment his cranky teenage children when waking them for school each morning with loud, operatic singing and “tap dancing” by their bedroom doors. If the mood struck him, he’d even do the odd jig in his rubber boots. He enhanced many a family photo by smiling with his bottom lip positioned almost touching his nose and even took morbid delight in calling some of his brothers shortly after his father’s passing to impersonate him with startling accuracy.

Known widely as a man with a humorous and quirky disposition, Brian had a softer side and often tried to help those who he thought may be short on their luck. Generous with his time and resources, he gladly lent a helping hand or the use of his tractor, truck, tools, and other toys he had accumulated over the years. It also wasn’t uncommon to later hear of him passing along a buck or two to someone he encountered, known or unknown to him, who may be having a rough go at the time.

Brian’s activities later in life included berating the government and those “filthy GD politicians”. Always well-intentioned and focused on helping the downtrodden, Brian wasn’t one to play along when it came to government requests. Refusing once to complete his Census, Brian eventually defended himself in court where he infamously approached the judge with two friends at his side, each one claiming to be Brian Stewart.

Gardening in retirement for Brian consisted of weed riddled vegetable gardens that he quickly lost interest in, neglecting to water or even harvest. Many days were spent pestering “Bert” at the shop, going for coffees with friends, belting out tunes to his grandchildren and yelling to Elle to see who drove in the yard.

The last few years in particular, Brian struggled greatly with his health but battled hard, like he always did, to feel well again. At the end of the day, he loved nothing more in this world than his wife, children, and grandchildren.

Brian’s family would like to thank the many healthcare providers who cared for Brian off and on over the last years of his life. In particular, we would like to extend our deepest gratitude to the nurses of the 5th Floor at the Aberdeen Hospital who cared for Brian with compassion while handling his twisted humor with amusement or bewilderment, and becoming he and his family’s lifeline, especially during COVID hospital lockdowns. We also wish to extend our deepest gratitude to the Aberdeen Hospital’s Palliative Care nurses, who provided such warmth and comfort to Brian and his family during his final days.

In honor of Brian’s wishes, his family will celebrate his life privately but would be most grateful for any favorite “Brian stories” you wish to share below or via email: brian.stories.2022@gmail.com

As we say “goodbye for now” to Brian and he sets off in his Bargain Truck into the sunset, we hope those who knew him will cherish the many, many laughs he brought in his lifetime, and send him love and prayers for the journey ahead.

and well preserved body, but rather to skid in broadside in a cloud of smoke, thoroughly used up,

totally worn out, and loudly proclaiming, "Wow! What a Ride!” – Hunter S. Thompson

Please dis regard the trees below.